We have discussed several times hp financial calculators, but we have not talked about scientific calculators for a long time.

We have 4 models in the roster - although one of them is difficult to find. I even don’t have a unit of it, and I think I’m not missing too much.

If you are in the market to buy a scientific calculator, you should also consider graphical calculator alternatives. They can do so much more, and for not so much money, when you consider the offers you can get for older models.

Let’s start with the cheaper ones: the hp10sII+ and hp300sII+. And let’s get it out from the beginning: THESE MACHINES ARE NOT RPN. Moreover, the logic in the machines has been seen in at least another two brands- it seems to be a rebadged design. This doesn’t mean that these are bad - far from it. I would have recommended against the previous units (hp10s and hp300s): they had basically the same logic, but they were cases in extremely ugly bodies, and the screen quality was not fantastic, to say the least. But these two units are much better: the screen has much more contrast, and the casing shows iphone 5 traits of design. You can see the pictures and judge for yourself. The 300sII+ is more advanced and has a greater range of functions, and, at 15€, is a safe bet.

The HP30s we do not carry. We don’t think it is good enough to bear the HP logo - and the price is not rock bottom. Pass.

The HP35s is one of the most beautiful calculators ever produced. Its black background, its clever use of colors for the different key functions, its legible screen with two lines of dot-matrix text, and its cursors to operate calculator and navigate the menus, make it really appealing. And it has real RPN and algebraic entry, and all the important scientific functions you may need, including complex and solving simple equation systems.

A couple of pictures are worth 2000 words:

Compare the aspect and the quality with the previous iteration (itself a "II" version:) 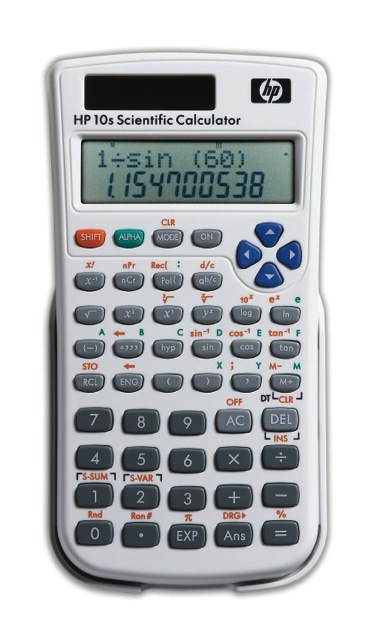 Clearly, it looks like the Iphone 4 has influenced the shape and the styling of the new machine. We have been told that they have been manufactured by Kinpo, and that its innards and firmware have been used in other machines by other producers. However, we have been told as well that the keyboard quality is much better than that of the previous machine. As of now, we have not received yet the new machine (we hope to have some units early next week, and as soon we get hold of them, we will post it here and as well on our newsletter).

Apparently, the key layout is the same. May we infer that the function set is the same? We'll see it next week, as well as a review of the new calculators (do not forget the 300s+)

We have already commanded the new HP units. We have not received them yet, but all the information we have is very promising (for a non-RPN machine, that is)

Let's look at the most powerful of the 2: 300s+, compared with the previous Smartcalc300s (not to scale - I am not to good resizing pictures)

As you can see, there are some more features in the new calculator. some of them are:

We still do not have the final price for the new unit, but it will be very similar to the previous unit. We intend as well to offer a double pack: the old unit and the new one.
None of both, by the way, are RPN.
In a couple of days I will show you the new HP10s+...now is time to go to bed.
Read entire post
Comments: 0
More about: HP smartcalc 300s+, HP10s+
Contact information
Terms and Conditions
Privacy policy