Calculator Types Calculator blog Yet another Easter egg in the HP50g

Yet another Easter egg in the HP50g

There is yet another Easter Egg in the HP50g. Apparently, the one shown in the previous blog page is the latest, appearing only in ROM versions over 1.18. This one apparently appears in all versions, but looks as a more primitive version of the game.

You need to write "HpMad", between inverted commas and within an entry field in any form - even the beep "tick" of the modes menu works. See the screenshot below:

You then will get a tetris screen in landscape format. (if you use the computer emulator, it is exceedingly fast and not fun at all to play with). The pieces are much more elementary, and the aspect is rougher than in the other Easter Egg. I am putting both here for comparison. You'll choose which one to use!

When you finish the game, you will be rewarded with your score in the same command line you abandoned shortly ago:

(I told you that the screen was moving too fast for my slow fingers - I was not able to score a single line!)

There is another easter egg in this calculator. This time is a little bit less useful: it just show a puzzle with the names of the developers of the HP49g calculator - at the time it was under Australian Calculator operation (ACO) team. You need to write RULES and press enter, and you will see this acreen: 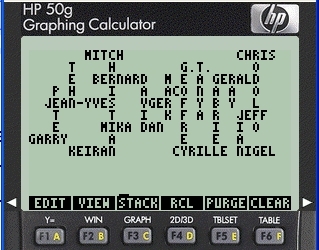 Easter eggs seem to appear with some frequency in mainstream software. In some programmer ambients, you cannot possibly release a significant piece of software without including these.

In a previous blog installment, we incuded a video with a chronometer in an HP45. The Easter eggs in HP calculators seem to have existed since very early in their history!

Googling for HP Calculator Easter Eggs will give you 480.000 results. It seems that this is not only existing, but as well interesting enough for many of us! Not only calculators, but also the HP 54600B oscilloscope has a Tetris inside.

In the company I work in, the AS/400 software development is under my responsibility area (although I am not directly related with programming or analysis. We are not a software company, just a AS/400 user with volume enough to do our own developments). I wonder if our developers are playing that kind of games in our much more serious business software...

Yet another Easter egg in the HP50g - Calculator blog - TheCalculatorStore