I would like to ask the HP experts about two things, related to the HP19bII

First, who on hell designed the HP28-HP19b-HP19bII side door? I have seen many units and all, and I mean all, have cracks in the doors, if not completely broken doors. This is not like HP. HP took pride in designing quality goods, and they succeeded big time with the HP35, HP65, HP67, HP41, HP12c, HP15c.

So, how come that a calculator with such fantastic firmware (both the scientific side and the financial side), could have such a poor solution?

I think that this was one of the main reasons for taking this otherwise fantastic calculator out of the market.

However, the solution was in front of them. So in front of them that they found it! Enter the back door HP19bII. Looking alike the other models, (perhaps a little darker black in the body, compared to the brownish color of the normal ones), it is safe to use without fear. It uses 3 N-type batteries, just like the other (and the 41c, by the way).

I really think that there has been no better financial calculator. I would be tempted to say that is one of the best calculators - period. (I know that most calculator specialists woill disagree, but that's because they are bent to scientific calculators). Its current sibling, the HP17bII, lacks a full keyboard to enter complex solver functions. You can see three full lines, nearly the full stack, and also has some more mathematical functions than the 17bII. It is the ideal calculator for an engineer doing management - it will cover all of his requirements. Keyboard is excellent. Screen contrast is poor - as it was with any dot-matrix calculator of that time; but then you had three lines that allowed you to nearly see your full stack

(I know that it is quite difficult to find good condition doors for this model, but there is this thread in www.hpmuseum.org that gives us hope for this otherwise magnificent model – the only calculator before the 30b that had a complete set of scientific functions in a financial body, but with a much better user interface.)

Coming back to the HP67, I need to test it thoroughly. I have spare magnetic strips (to be used in the HP41cx reader), and I plan to test it tonight. I do not care that it does not work – there are plenty of resources to repair the gummy wheel syndrome that most calculators develop.

The seller warned me that the batteries would be flat and unusable. The good thing is that the connectors look shiny – proof that the acids have not leaked out.

The machine comes without a charger, but I have some in inventories. The pictures sent showed the machine working – let’s see it tonight.

Once connected, the machine works. Some keys are a little bit sticky – let’s see if there is a cure for that. I have now changed the batteries for spare new ones. I will leave the machine charging the whole night and see tomorrow if it holds the charge.

I have cleaned it with the normal computer cleaning kit – it looks now much better!

Used to the different LCD screens, to come back to the red LEDs of my infancy brings warm feelings to me…

I have now received another calculator for the "harem": an HP 19bII with the back door.

I have fond memories of the HP 19bII. While my first calculators were HP (spice models, beginning with the 33c), I did my last 3 years in university with a Casio pocket computer. At the time, I did not have the funds for the HP41cx - which was the model to have. However, for all practical purposes, the Casio was a better calculator: it could be programmable in Basic and I could do any numerical programming I was asked in my engineering courses. While I missed the powerful Basic of the HP85, with which I made my first money, it was good enough for me.

When I finished engineering I started an MBA. I then got some more money, and I bought the then best available financial calculator - the HP19bII. I enjoyed it during 2 years. It had all the financial tools, plus a good set of statistical and mathematical tools. However, at the middle of my second year in the MBA, it fell to the floor and the battery door went off. I was not able to fix it properly. Tired of sticking it with tape every now and then, I left it in a drawer (from where it was picked up by my sister) and got an HP 17bII instead. A classy machine as well, but missing key features like trigonometrics. Well, it was more than good enough, but it market my end as a self-respecting engineer.

Several years later, when at a covneience store in Madrid, I saw a stack of blister packed HP19bII. They looked blacker than I remembered, but at that time I was not looking for another calculator, and I passed by. I did not know at the moment that I was looking at the back door HP 19bII.

When I started collecting calculators again, the 19b was one of the first to get. I knew what to expect: a well specified calculator, with all the functions I could need for a non-academic environment (seriously, how many times are you inverting matrixes in real life?), but I knew as well that it should rest on my desk most of the time, unless I wanted to have another battery door casualty.

I have just bought a back-battery door HP19bII. I guess that many of you would like to see both kinds compared:

Front view: the back battery door on the right. It shows a darker colour, but the difference is not too big.

Here is the reason for getting it: the back door: 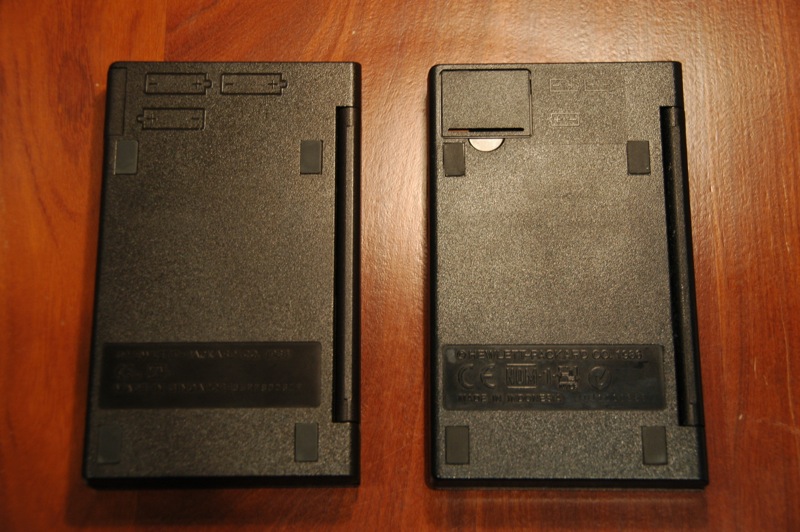 The batteries were set in place with the door, but there was pressure on the door all the time. Whoever changed a set of batteries onthese machines know what I am referring to. This design change solves the problem (at  least, this problem!)

The keys have the same good key feel - totally different from any other HP but very satisfactory. This sample was made in Indonesia.

The keys are much blacker than the original:

Now that I think about it, I have not tested it for speed differences - and I will not do it today. I keep most of the claculators in the collection without battery, to avoid corroding the terminals, and to do these tests I would have to go through the painful exercice of changing the batteries again...