New design in for testing

However, sometimes I would like to have more adhesive surface to the brokenback part. Sometimes the destroyed part of the screw head support is so big that there is limited spece for the adhesive to bond.

My friend Ignacio Sánchez suggested to make both parts a single one, that would be pasted on a back side that has been flattened and cleaned from debris. This would be glued in place, therefore making it a permanent repair,

Here is the current piece: you can see the holes in the screw area, that mimic those of the original part: 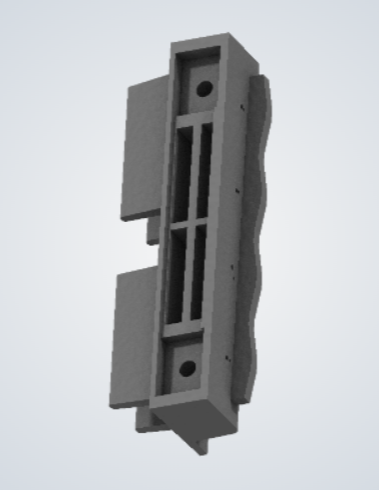 And here you can see the new design. It can, obviously, be improved by closing the hole areas not used by the existing tabs of the back side. This will be the next redesign ater testing.

Now the parts are being 3D-printed at our supplier. Both will coexist - I'd rather prefer to make a repair that I can undo, or re-repair without much hassle - but sometimes the glued parts is what the doctor orders. Also, 100% testing becomes fundamental to make sure that it works in your calculator! Stay tuned for the formal announcement when the tests have finished

New design in for testing - The Calculator Store