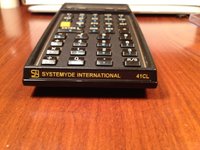 I have found a time module for the HP41CL and I am now enjoying the facilities it provides.

The most important part, in reality, were the time functions that were already available from the beginning, thanks to the architecture devised by Monte; but it is nice to use your calculator as a machine to keep your appointments. Of course, an smartphone is much better for that purpose, even as a chronometer; but together with the HP IL interface, the HP41CL is able to control many things, like lighting, multimetres, even oscilloscopes.

You may have read my messages about the HP3468A. This is an HP-IL enabled machine. I have two units (one for me, one for the shop), that I have converted to 230v/50hz use. They work flawlessly with the HP41CL.

We have an apartment in a mountain area. We know that the voltage there is not too stable, and the drops have damaged in the past some appliances. But, of course, the local utilities company denies everything (although they have started working to improve the supply with a new transformer house nearby). To prove the point, I have set up the voltage meter of the HP3468A so that it is triggered and read by the HP41cl each 5 minutes. This way I am able to map the whole performance daily. It is a pity that this method does not allow me to see the real peaks and valleys, but at least it gives a good proxy to the real situation. Then you can make some statistical calculations, apart from knowing the waveform (since I am also storing all the points - it is a pleasure to have such a big memory). I have seen voltages as low as 193, which is 16% lower than the European standard at 230.

(By the way, do you know the reason for the 230v? I have been told that the European bureaucrats, faced with different voltages across the English channel (240 and 220v), decided to set the standard at 230 and just enlarge the tolerances. That way, the UK would continue at 240 and the rest of Europe at 220, and everyone would be happy - except the appliances, working with much wider voltage tolerances)