Now we’re starting to test the Smartstream 410 together with the HP Prime. Connetcing the whole thing together is easy - provided you have the right cables - lest not forget that the connection cable between the Fourier probes and the Smartstream itself is not standard, and it had to be ordered separately. 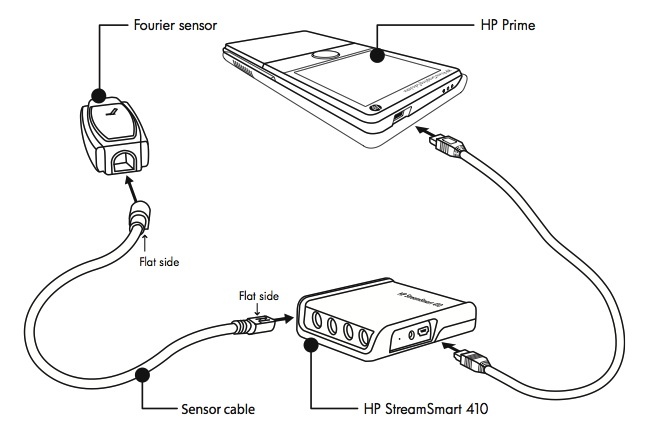 Once the machine is connected to the HP Prime with the USB nano to micro cable, and the HP Prime is switched on, you need to look for the DataStreamer app. Once opened, the HP Prime recognizes the Smartstream and the probes it has connected. In my case, I have a multi-range voltage probe and an electrical current probe.

The current probe is always well identified, but the voltage probe has only been identified as voltage once; the rest of times, the system considers that it is a temperature probe. I have tested it in a couple of different channel (the smartstream has 4 different channels), and with 2 different connection cables, and the problem remains. I will contact HP regarding the issue.

You can set the system to stream “as standard”, and you can set experiments where you set the time for the experiment and the number of samples to be taken. You need to specify too to which app the data streamed will be sent (for streaming, there are always two variables anyway - the one measured with the probe and the time variable), and the choices offered were the Statistics 1-Var and Statistics 2-Var.