New firmware for the HP Prime

Here's the new firmware for the HP Prime!

If you already have your HP Prime, you can use the HP Connectivity Kit to download the upgrade to it, the upgrade to the virtual calculator and the upgrade for your own prime. It is much better than searching the web to get the proper file. In fact, the file is so big that I need to do some special programming in my website to handle files that big. Keep to the standard updating features of your software and you'll be fine.

While it has worked as a charm with Windows 7, I had more problems to do the downloading from my Mac-installed Windows XP. Yes, I know that it is old and not maintained, but works like a charm with Mac, is stable (never got the blue screen of death in my Mac) and I don't need to spend more money to run it.

You need to backup your calculator before. This is not a "best practice" standard warning - you will lose some settings and variables in the move. You will keep the apps you had created, though - but there are unexpected things that may happen. In my case, I had several apps using solver functions and using already created variables, like EBIT or COST. Next time I opened the solver app I had created, the formulae that used said variables had been changed to E*B*I*T and C*O*S*T. So, beware!

Finally I got the Connectivity Kit and the new Virtual Calculator up and running on the Mac. The upgrade to the Prime had already been done in the Win7 machine.

If you have any kind of business/accounting sensibility, numbers' magnitude matters. It is not the same working with millions than hundreds of thousands - and you want to see it at first sight in your screen. You can see below the options. 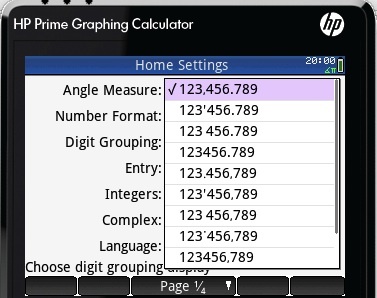 I have selected the one with spaces between each three digits, and decimal comma instead of decimal point. Now you can check your numbers much faster, and find out at first sight if your result is right or wrong.

Also, the aspect of the connectivity has improved much. There was a long time since I used it last, so I don't know if these features were already existing: 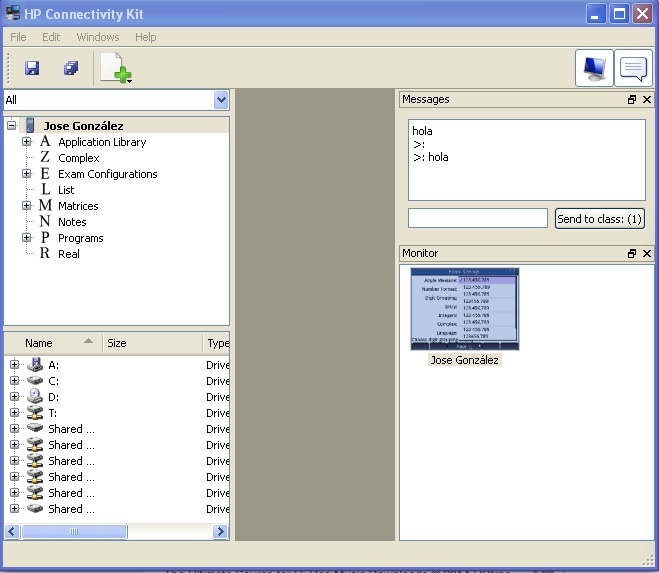 1.    Application has had major improvements to the user interface. Please refer to the included connectivity kit User's Guide for instructions and details.

2.    Pressing HELP in an open command line will attempt to find the name of a command based on the prior input up to the cursor position to display system help for that command.

3.    Includes Edition 2 of the on calculator help files (English only in this release).

5.    Wireless support for capable units turned on. Wireless icon will appear in the right top corner menu for units that can support the HP Prime Wireless Kit.

6.    Calculator unit-to-unit communications has now been enabled on units that can support it.

8.    Two new numerical display formats have been introduced. These are “floating” which only displays up to a specified number of digits, and “rounded” which is similar to the “fixed” format except trailing zeros are suppressed.

10.    Vectors are now displayed as a single line object until they become a matrix. This aids in distinguishing vectors and matrices.

11.    User selectable first day of week setting for use through the system.

12.    First boot unlock and settings wizard. User will be asked to confirm language selection and some initial settings.

14.    Geometry application has been completely redone and is much faster, consistent, and capable than before.

16.    Pressing ENTER will now open chooser in a dialog or toggle checkbox.

18.    TRIANGLE, FILLPOLY and LINE commands can now draw multiple objects in a consistent way with each other. Useful for very complicated 3D drawing in user programs.

1.    A horizontal skin has been included for use with monitors that are restricted in the vertical pixel range.

2.    Resolved issue with removing last row or column from a CAS matrix in the matrix editor.

4.    Resolved issue with EDITLIST/EDITMAT commands not working in RPN mode.

5.    Resolved issue with BLIT command when specified destination was a zero sized region.

7.    Resolved issue in 2D integral template where EEX key would always add a 1 before the E in the evaluation limit locations.

9.    Resolved issue where auto power off did not function in graphing applications.

11.    Resolved issue with key buffer not being cleared when the user aborts a running program.

12.    Resolved issue with auto off timer in plot gallery not being reset on user touch.

13.    Resolved issue with auto-off timer in plot gallery not being reset on user input.

14.    Resolved issue with copy and paste in spreadsheet.

15.    Resolved issue with sigma character in command names not being consistent through entire system.

16.    Resolved issue with RETURN call inside repeating loop in a user program.

19.    Resolved issue with G0-G9 in user programs while spreadsheet was active application.

21.    Resolved issue with KWh in menu needing to be named kWh to function properly.

22.    Resolved issue where storing a number to a vector padded with too many zeros.

26.    Resolved issue where calculating integration with boundary at 0 appeared to fail.

27.    Resolved issue with case sensitivity in note and program catalog.

29.    Resolved problem where copying .+ or .- operators would not insert space before commands.

30.    Resolved issue with ΣLIST and a vector argument.

31.    Resolved some issues with F1 and CAS interaction.

33.    Resolved issue with eigenvectors of diagonal matrices in home.

34.    Resolved issue where DMS toggle on home screen did not work with certain numbers.

35.    Resolved issue with RPN stack not being cleared by a clear in memory manager.

36.    Resolved issue where changing HEX or other similar settings did not update stack display immediately.

37.    Resolved issue where clearing memory from catalog did not clear Ans variables.

38.    Resolved issue where pressing BKSP on a CAS variable from chooser did not delete it.

39.    Resolved issue where CAS screen would have left/right alignments disrupted after a power cycle.

Resolved issues and changes in CAS

2.    Resolved issue  with units in approx mode and auto simplification on units

13.    Change interpretation of A/B where B is a square matrix to inv(B)*A with a warning

20.    Make ifactor return an error if number too large

24.    Resolved issue with matrix/vector * object, if one arg to * is approx, evalf the other one with current context modes (instead of null context).

31.    Resolved issue with algebraic extension with i inside

34.    Make left and right accept an integer represented as a double as 2nd argument

41.    element added to the list of functions that should not be auto simplified

42.    RANDMAT with one argument accepted.

47.    area now accepts a function plot as first argument, 2nd argument a..b, or 2nd argument a, 3rd argument b, returns area under curve. For a parametric plot, a and b are the parameter range.

49.    Resolved issue with ARG in degree

54.    Replace warning by error for recursive definition except for when/ifte/program

56.    Enable for and if as lowercase synonyms for FOR and IF in the CAS.

57.    Make REDIM and REPLACE (CAS version) accept a matrix instead of a variable name as 1st arg.

58.    Resolved issue with regroup(inf) and for FP

59.    Resolved issue with poisson_cdf with 3 arguments

61.    Handling of inequalities with approximate coefficients using an exact conversion

62.    jordan for numeric matrix with exact coefficients but no exact eigenvalue converting to approx.

70.    Make sum eval approx if exact mode is not checked

72.    Resolved issue with col, suppress and makemat (indices starting at 1)

I will continue explorin the features in the next entries of the blog.