The HP19bII hits a sweet spot in me. It was the calculator that was recommended when I took my MBA after engineering school. (The HP17bII was the other, cheaper alternative). It had everything the HP17bII had, plus 3 lines on screen and a more populated scientific menu: it included everything an engineer could need, short of matrix algebra: several conversion types, probability, trigonometrics and hyperbolics, etc.

The problem of the breed (common to the other clamshell units, the HP28 family) was the design of the battery door. The batteries placed a lot of stress on the door, and this force was supported by a limited area. When the calculator fell on the floor, the door usually broke down. Also, the plastic used was quite brittle compared with other models, making it more fragile over time.

At some point in time, there was a redesign to bring the battery door from the side to the back, solving the universal problem of the side door. In my opinion, also the plastic is a different formulation, softer and more flexible. Looks darker, too. The keys are black instead of grey:

And here you can see the back of the calculators (anf the different plastic color):

We have solde several units, but this one is for me! (By the way: I received one without the door, so we designed a 3D-printed door for the back door HP19bII - please contact sales@thecalculatorstore.com for info if you want!

HP17bII as the best all around financial calculator 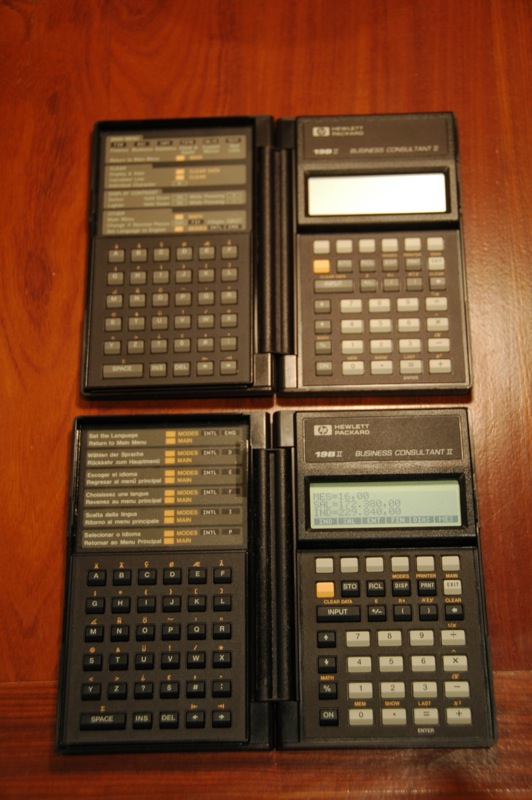 I have been using during this Christmas period the back door HP 19bii. I had left it on my desk at home, and it was at hand when working from home.

As you all know, the main problem with the Charlemagne Clamshell HP calculators is that they fail always in the same weak spot: the battery door. The batteries make pressure to the door and, with the plastic getting brittle with the passing of years, it will eventually break. The cure is not easy, and never beautiful. It surprises me that this calculator model has never failed in my experience by the hinge that keeps together both parts of the clamshell - all moving parts are prone to fail. Nevertheless, a failure there is not so critical. Unless you program with the solver, you can live with just the right part of the calculator (someone could argue that the HP17bii is just the right part of the hp19bii!)

Sometime ago I found in a shop a Hp19bii that was not boxed, like the original ones, but in a blister, like the new ones. This packaging looked cheap, but within there was a calculator where the main problem had been solved: the battery door had been moved from the side to the back!

That wasn’t the only change. The plastic seems to be softer than the original one; the color is also more black than brown. The keys are alright. Screen contrast is like all old hp19 and hp17 - quite bad for current standards. Comparing a new 17bii+ with an old one is a joke when it comes to contrast.

Common with the hp17bii is the fact that once you are at a menu level, you remain there until you press exit. You don’t need to start the whole menu excavating process for each new repeated calculation.

But the screen is so much better with three lines in sight (compared with the one in the hp17bii - and a much better font.

You need to factor in several other details:

I would like to ask the HP experts about two things, related to the HP19bII

First, who on hell designed the HP28-HP19b-HP19bII side door? I have seen many units and all, and I mean all, have cracks in the doors, if not completely broken doors. This is not like HP. HP took pride in designing quality goods, and they succeeded big time with the HP35, HP65, HP67, HP41, HP12c, HP15c.

So, how come that a calculator with such fantastic firmware (both the scientific side and the financial side), could have such a poor solution?

I think that this was one of the main reasons for taking this otherwise fantastic calculator out of the market.

However, the solution was in front of them. So in front of them that they found it! Enter the back door HP19bII. Looking alike the other models, (perhaps a little darker black in the body, compared to the brownish color of the normal ones), it is safe to use without fear. It uses 3 N-type batteries, just like the other (and the 41c, by the way).

I really think that there has been no better financial calculator. I would be tempted to say that is one of the best calculators - period. (I know that most calculator specialists woill disagree, but that's because they are bent to scientific calculators). Its current sibling, the HP17bII, lacks a full keyboard to enter complex solver functions. You can see three full lines, nearly the full stack, and also has some more mathematical functions than the 17bII. It is the ideal calculator for an engineer doing management - it will cover all of his requirements. Keyboard is excellent. Screen contrast is poor - as it was with any dot-matrix calculator of that time; but then you had three lines that allowed you to nearly see your full stack