A boxed HP41CL and the HP19bII collectors' set

We are putting together two new items:

With them, you have this part of the collection ready in just one swift stroke!

You will have the chance to compare all the different versions of what I feel is the most accomplished financial calculator ever made - and one of the 3 or 4 top calculators from HP - all types comprised.

(For the sake of clarity - the silver HP17bII in the pack is a new unit, in its original blister. You can choose in the instructions of the order which specific language you want it) 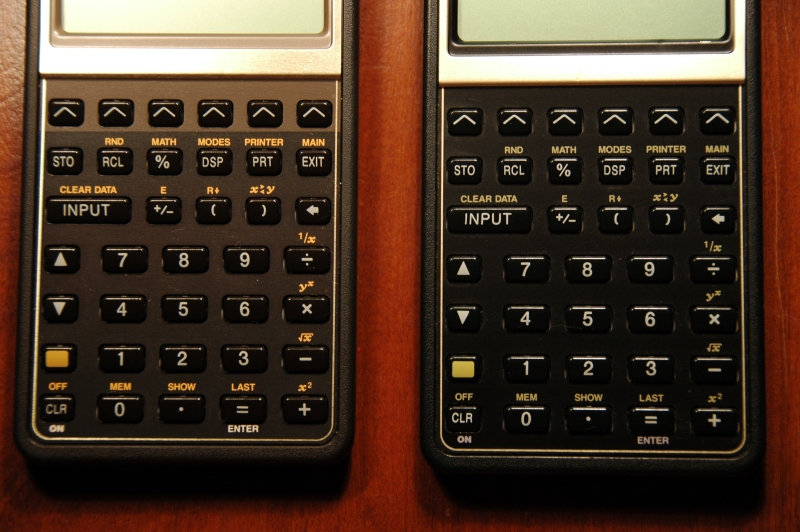 I think you all know that there was a black version of the HP17bII. You can find a comparative picture besides this text. But does anyone know where was it produced? When? Does it have the same quality as the rest? (As I don’t have my sample anymore, I can’t recall whether there was any difference at all!)

Frequent readers of this blog know that I am not too fond of the new HP35s; however, it is one of the best looking calculators ever made. Anyone with technical inclination that sees it wants one. Then, when you compare with a fully fledged hp41cl… but that’s another story. The point here is that purely black calculators look fantastic.

I would really appreciate your answers to the questions above!

Black and Scholes for the different HP calculators

Back in 1973, Fischer Black and Myron Scholes published a paper, "The Pricing of Options and Corporate Liabilities”, where they derived a differential equation to try to model the value of some kinds of options, initially only European type. The term “Black and Scholes” was coined by Robert C. Merton in a further study that developed the mathematical model behind.

Nowadays, it is the most used equation in high level finance, after, of course, of the Time Value of Money equation.

Now, all financial HP calculators, and most HP graphical calculators in my memory, have the TVM equation. Even the children who use the Prime have access to calculate their own mortgage - not a good learning for a youngster!

But, of course, being the HP calculators the gold standard in finance, it was clear that there would be ports of the formula to most calculators. The HP12c, that I still see in all financial boardrooms that I visit, is very limited with its 99 program steps; but I have found at least three programs for it - all of them using most of the memory.

By its nature, the best calculator to handle the Black and Scholes formula is the HP17bII with its integrated solver. You can find an example of B&S formula in -of all places- HP’s very own website. To save you some search time, I enclose the formula. Just seeing it, I don’t have any willingness to enter it! Won’t work first time, sure; and debugging it will take a lot of time.

Tomorrow we will see other approaches to solve it, with more/less precision and occupying more or less memory, and for other calculator models

How to effectively use the solver for your own equations

I consider the solver model of the hp17bII - hp19bII families the best there is. It allows you to perform normal calculations, but you still have the possibility of entering data at any time in on of the variables.

When using the HP48-hp50 family of calculators, this is one of the missing features for my daily operation. So I began exploring alternatives to mimic the behavior of the solver I love the most.

The typical solver in the HP50g is very useful and gives a lot of information: a screen with all the fields of the formula with their current values. However, it does not allow you to continue with your calculations, and just use the solver keys when needed, like the 17bII.

In the reference manual, there are information about many hidden menus. One of them is MENU 75. It goes to a submenu where there are some solver related options. 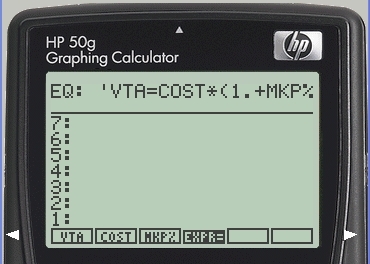 How to automate it just a little bit more?

We can prepare some "programs" that lead to the solver formulas that we want. This is what we did for the financial calculator:

A significant difference over the series 17bII solver is that the latter calculates the value of the variable when you key on it after having keyed on other variable before. So it knows when to solve.

With this menu system, you enter the variables the same way, but in order to solve, you need to left-shift the variable you want to solve for.

Once you get the idea, you can live quite well with it! Now I use it for most of the normal daily functions. Actually, it is easier to select the program by browsing on the variable list, than going through the list of entered formulas in the 17BII solver.

More speed comparisons for the different versions of HP17bII

Don made me doubt about the gold version measurements, but I have now confirmed them.. His is as fast (or slow in this case) as the silver version. His serial number is CNA 62900787, but I am at a loss to explain the meaning of the serial numbers of the new models.

Don is a frequent poster in www.hpmuseum.org that shares with me an appreciation for the humble HP17bII. It is for us one of the best thought out HP calculators. The menu system is so well organized that HP did not feel the need to clutter most of the keys with several functions. And it is quite easy to navigate or learn - easier than the HP50g or the 30b.

The only missings thing in the HP17bII to be complete are:

The newest model has a good keyboard (clearly better than the gold version, not able to make up my mind between the oldies and the newest) and a fantastic screen (the best of all the series). I am still on my first set of batteries, so I do not know about its consumption (it is the calculator that I use the most at work)

I have just received the black HP 17bII that I had been looking for.
Does anybody know when these units where made? The pictures herebelow compare it with another calculator with the typical, uglier colours. Both are made in Indonesia,but you can see the difference. Even the pouch is black instead of brown, and seems to be of better quality:

I have just received the black HP 17bII that I had been looking for.

Does anybody know when these units where made? The pictures herebelow compare it with another calculator with the typical, uglier colours. Both are made in Indonesia,but you can see the difference. Even the pouch is black instead of brown, and seems to be of better quality: 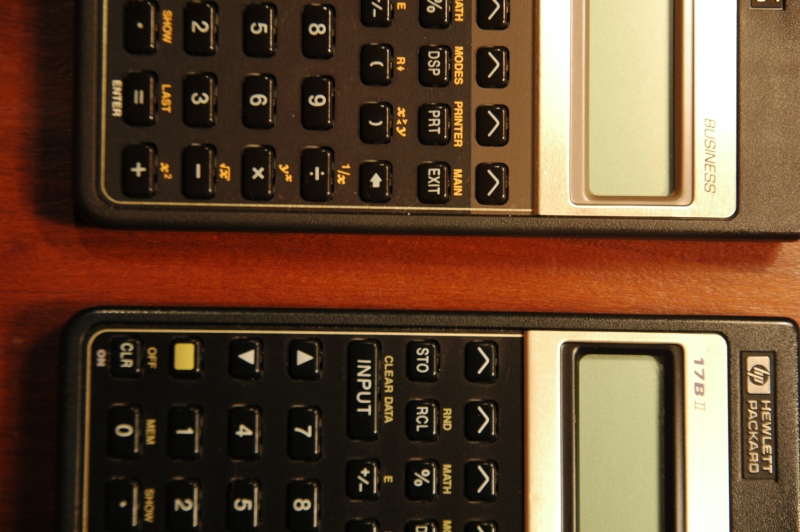