Although I have it in my product portfolio, I have never used the HP 300s SmartCalc. So, when my son asked one for himself, based on the bright blue colour and the screen with fractions (he's 8 years old and he's working with that at the moment), I could not deny it to him. At the price of 14 € each, this is not something that I fear to give him at his age. I will give him a 50g and a 15c in due time, but probably is a little bit too early for that...

The first thing that my esteemed readers need to know is that it does not have RPN. Some of you will stop reading here. The others may continue.

It has the same case format as the 30b and 20b - it shows that it has been produced by the same company in China (and the serial number starts by 4CY, like them). It has as well a cover - helpful if you are a student and it goes into your backpack, together with hard tools, etc. The cover is traslucent and does not rattle. It has a solar cell on the top.

The keys are similar to the ones in the HP20b. The keys look as rotate-and-click but are not. They are made in hard plastic, and have a nice feedback, but miles behind that of HP calculators of yore, and even so compared with Kimpo models like the 17bII+, 35s and the 12c anniversary or 15c Limited Edition.

The screen has a blue dot-matrix display, with better display contrast than that of the 48 family (except perhaps the few black models) The cursor keys are fully functional. There are 31x96 pixels on the screen and 14 LCD indicators 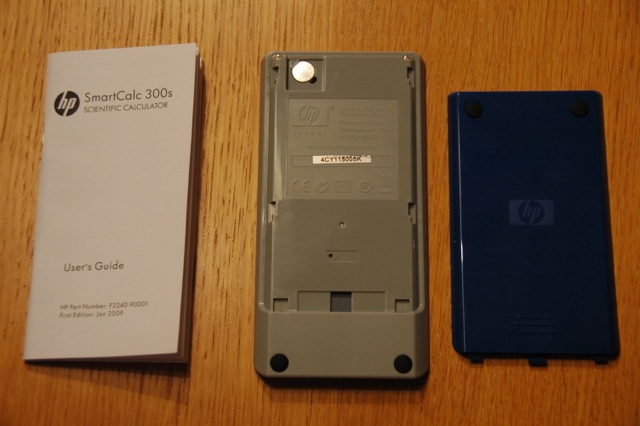 Yes, I had the same question that some of you are having now: can it be repurposed? does it have the connectors on the back for reprogramming? The answer is no, and the proof is in the enclosed picture. A pity, since it has a fantastic dot matrix screen that would allow to do wonderful things...

There are three basic calculation modes: COMP for general calculations, STAT for statistical and regression calculations, and TABLE for generation of number tables based on an expression. Previously I had seen this last option just in HP graphical calculators.

There is as well a key for calculator setup. There is a choice of input/output format: Math or Linear. Math will give fractions and irrational numbers written as you would do in a notebook; linear is writing it in a line. This is akin to the equation writer on the HP50g (MATH), and the plain text equations (LINEAR) The latter is much more compact in terms of memory used (which will be relevant later)

Fractions can be expressed in Mixed (a b/c) or improper (d/c) forms.

You can enter the calculations like you would on a pad, and then press equal. You can omit the multiplication sign in front of parenthesis. The system adds the missing parenthesis at the end of the formula. These can be up to 99 bytes long - hence the importance of the input format used.

Writting formulas is quite comfortable - the habits gained with the Equation Writer apply in many cases.

The results in MATH mode are as well using fractions, square roots, and Pi - unless you use shift =, in which case you get a decimal result. This method is better than the one used in HP top graphical calculators.

An interesting feature is the S-D transformation. It changes the value between the Decimal and Standard form (with fractions, Pi and other irrational)

The manual (called user's guide) is extremely small. I have tried to fit it between the calculator and the cover but I could not.

There is a calculation history that can be explored with the cursor keys. This story is cleaned when the calculator is switched off, or when MODe is changed. This does not seem to be a good idea! You can edit the expresions used to modify whatever you need.

Memories:  there is an independent memory (M) and variables (A, B, C, D, X, Y). The memories can be used in expresions and will use their current value.

The function set is quite complete: Hyperbolics, Logs in any base, permutations and combinations, polar/rectangular conversions, centesimal/sexagesimal conversions, factorial...

The statistics mode has 8 different types of regression - much more usefu than the typical 4 (while you could always use variable transformations, but this required some math creativity). You can enter 80 values at most, half of that if 2-variables

Did not have the time to perform some calculator forensics - a little bit late already...

During all the review I had the strange feeling of using a very nice calculator...from another brand. Being used to HP for my whole life, with some stints in pocket Casio computers, I grew accustomed to a certain way of operating. While this calculator is very interesting in itself, it does not have the HP logic - not only for the lack of RPN but in a more general way.

for the admission price (14 €), it is a serious scientific calculator that can be given to your son for school - unless you want to spoil him with the joys of RPN!