Remembering the recent past on HP calculators

More that a year has elapsed since we opened this website. Of course, I have not been linked to this area all my life, so my point of view for what follows may be limited; but the amount of news during this last year is amazing!

From HP itself, we have seen the HP12c Anniversary version; the HP 15c Limited Edition; and the HP39gII (first in China, soon to be released in Europe as well).

If you read my last week's blog, I had forgotten at the office my HP15c Limited Edition. Together with the HP17bII+, they are my everyday calculators. And, until the European shipment arrives in late January 2012, I have no chances of getting it back!

Thanks God it was there! It seems that calculators are not attractive items for burglars anymore...

On another note, I received a message from a Chinese company where it asked us about our announcement in T3 magazine (the gadget specialists). What ???

It appears that it had a link to our site in a monthly list of desirable gadgets. A low punch calling HP "the touchpad makers"...

The TouchPad makers serve up this limited edition number cruncher. a programmable, retro gem that HP claims has been an office essential for finance and business folk for years.

Register Arithmetic on the 12c

On Friday I forgot my HP15c LE at work. I hope to find it back on Monday morning.

So I had to make do with an HP12c anniversary when I went out for shopping, trying to keep count of the money spend on purchases. As I had been using a program before, and I wanted to keep the data used, I did not want to use the first 4 registers.

Neither recall arithmetic was working with any register

I was desperate! was my program using too many registers? No: 17 registers left.

Was there a bug in the system? I had to wait until yeterday night to try with another original HP12c (US made 1985): it did not work either. Well: at least I dod not have a defective sample.

While the 12c is a very stylish calculator, and is very appropriated for every day business work (the three percentage keys are very much used in any kind of analysis, and very well placed), it has several points that make prefer the HP15c for every day work (and the 17bII+ for pure, desktop business work)

Once tested the new "European" HP12c Anniversary, it shows as well the 2008-7-2 firmware date - therefore, no changes.

Serial number CNA13206QS - therefore, produced in the Kinpo factory. Excellent key quality. The pouch is again slightly thicker than the plain HP12c version, but not as thick (or nice to the touch) as the one in the HP15c Limited Edition reissue (which is the best since the eighties!). It is, anyway, excellent in all counts. 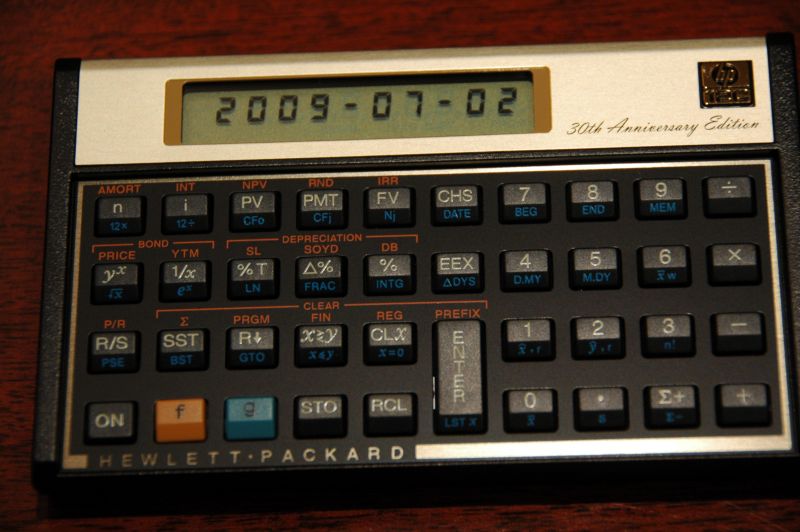 The HP12c Anniversary is now in stock !!

We have finally received this afternoon the shipment of HP12c Anniversary in the warehouse. We will begin shipping on Monday the pending orders to our customers. All of them should have received it by the end of the week. We hope you enjoy them!

If you remember the discussion about different keyboards of ARM HP12c, the Anniversary belongs to the "good" ones.

More comments on the HP12c keyboards

If you remember our previous post, we were talking about the different keyboards in HP12c's of late. Seems that it is due to products from different factories - the big % sign coming from the Invertec factory and the small % coming from Kinpo.

Now, all the new 12cs I am receiving belong to the "big %" type...except the new HP12c Anniversary (due in Europe from next week on!)

(By the way, the HP15c Limited Edition comes as well from the same factory, and you should expect the same quality - I can attest it!)

Presentation is nicer than it looks. The outer plastic you see is just that - an outer plastic that can be removed to show the box in full glory. The fake leather surface is decent for a gift (By the way, if you ever considered to give a calculator as a gift to anyone other than a geek like you and me, this is the right one (this one and the new 15c LE))

This is a gift that can appear under a Christimas tree without embarrasment from your relatives. It looks a well thought out gift. I see it as well as a present to contract signatures, etc.

So, what is the difference between this calculator and the plain 12c? Let's then take it out the box:

Compared with the 12c that I have, the labels are more bright, shiny, less matte. This applies as well to the red painting on the calculator surface.

Rest assured: key click is just as good. I, for one, have not been able to decide which I like better between the original 12c and the new 12c and anniversary versions.

See all three in a row:

It is worth noting that the fabric of the pouch is slightly thicker on the anniversary than on the new 12c and feels more substantial - and both are thinner than the original 12c version. Nowadays I would prefer the Anniversary version over the ARM 12c and both to the original one (maybe it is just old and does not have the feel it once had)

And now for a taste of the original:

See the shiny keys that will never wear, since labels are co-moulded in the mass. Still working fine after so many years!

And now, the Anniversary one: