Presentation is nicer than it looks. The outer plastic you see is just that - an outer plastic that can be removed to show the box in full glory. The fake leather surface is decent for a gift (By the way, if you ever considered to give a calculator as a gift to anyone other than a geek like you and me, this is the right one (this one and the new 15c LE))

This is a gift that can appear under a Christimas tree without embarrasment from your relatives. It looks a well thought out gift. I see it as well as a present to contract signatures, etc.

So, what is the difference between this calculator and the plain 12c? Let's then take it out the box:

Compared with the 12c that I have, the labels are more bright, shiny, less matte. This applies as well to the red painting on the calculator surface.

Rest assured: key click is just as good. I, for one, have not been able to decide which I like better between the original 12c and the new 12c and anniversary versions.

See all three in a row: 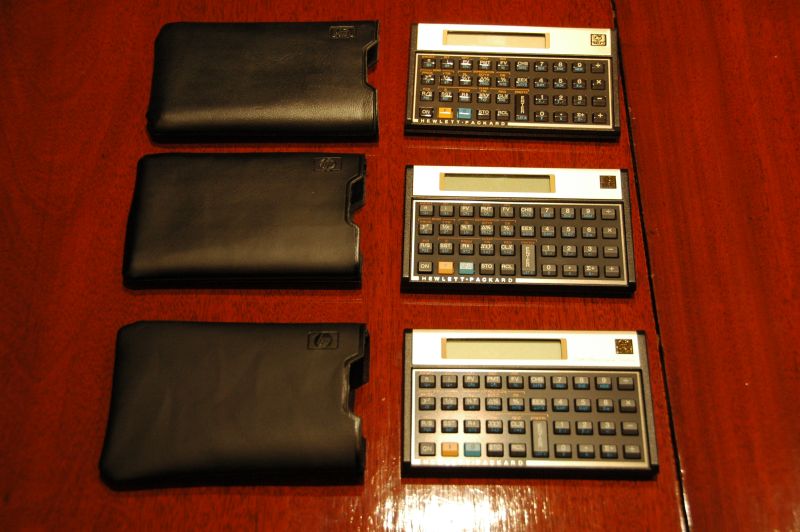 It is worth noting that the fabric of the pouch is slightly thicker on the anniversary than on the new 12c and feels more substantial - and both are thinner than the original 12c version. Nowadays I would prefer the Anniversary version over the ARM 12c and both to the original one (maybe it is just old and does not have the feel it once had)

And now for a taste of the original:

See the shiny keys that will never wear, since labels are co-moulded in the mass. Still working fine after so many years!

And now, the Anniversary one: