The HP10bII+ - a different animal from previous models

We have received a new lot of HP 17bII+ calculators. They are now priced at a competitive 77,90€

It is true that the sexiest financial calculator is the HP12c, but the HP17bII+ is soo much more powerful.

From the beginning: it is extremely solid. The whole back part is on hard plastic - the beautiful metal front is protected by the raised sides. Keys are big and wide, and click very well. As the machine is menu-driven, the keyboard is not as cluttered as the HP12c or some scientifica calculators'.

It comes with a protective pouch. It is build in the same way as the HP35s, but it is not as big as its scientific sibling.

The screen is two lines but one of them is reserved for the menu hotkeys. This hotkeys can be programmed through the solver application - which is a programming system in itself - and an easy one, at theat.

The menus make it a lot easier to remember how to do things. While with the HP12c you achieve things with less strokes, the HP17bII+ allows you to be able to recall most of the components of the calculation for later use.

When it comes to statistics there is no comparison between both. With the HP12c, with each data pair entry you are feeding the 5 counters (n, x sum, x2 sum, y sum, y2 sum and xy product) but the information as such is not kept. With the HP17bII+ the data is kept in a list that you can save, edit and retrieve for another moment.

Cashflows for DCF calculations are kept in both - but the HP17bII+ makes it much easier to edit them. You can also choose between individual cashflows or grouped cashflows.

The real strong point of this calculator is the solver. You can write any formula algebraically and the system will keep all the variables in the hotkeys, allowing you to solve for any of them. As you can store a lot of formulae, you can really configure the machine for your own uses. Typical formulae include Black and Scholes, trigonometric functions, break even analysis, etc.

There are a lot of scientific functions too - all except trigonometric (but think - when was the last time you used them?)

Some of you ask me several times what are the differences between HP17bII+ and the original HP17BII. Here there are:

Many of us are working in financial positions. I have seen in many offices financial personnel using what in calculator business are called "four banger": just the basic four and typically percentages. In some cases they also have a small printer. This is more than enough in most cases. And in the cases this is not required, you use the Excel spreadsheet - which can also show in a presentable way the results that you are looking for.

In addition, we typically have the oder HP17BII units from the Pioneer series: a different feeling and a still very valid calculator.

Tomorrow we will describe the different units

The HP50g as a financial tool (II)

Let’s continue with our aim to convert our powerful HP 50g in a FINANCIAL tool.

We ended last time introducing what would be our main tool: the CST (custom) menu. We proceeded them to fill the 3 first positions with off-the-shelf percentage functions: %, %ch and %T. In my experience, these are the most used financial-specific functions in your daily work.

Secondly, there comes the date calculations, in order to know when payments are due, or to plan for maturities of investments. These are DDAYS and date+. Remember to set your preferred date format in the flag screen. It’s flag xx.

In DDAYS you write 2 dates in both levels, and it calculates the number of days in between; and in date+, you put a date and a number, and it will give you the date adding that number of days to the other date. It works with negative numbers as well.

Now for the other functions: the key BUS stores the following short program: << 79 menu >>. This one leads to a submenu with TVM functions, as shown: 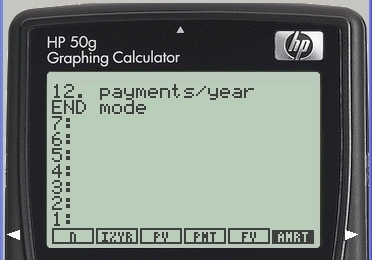 the IVA (called after the name for VAT in Spain) calculates a % mark up on cost; this is stored as the following program. The last part of it leads to a menu page, where you take the SOLVR option and enter into the soft menu screen.

TOTAL applies the formula below. 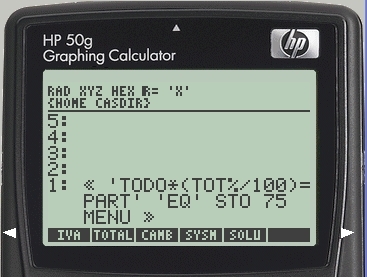 CAMB is the Spanish word for Change. Same rules apply.

Next day we will talk about the IRR calculation...

More about the HP17bII

This is probably one of the most underrated calculators in HP's current roster. It has everything one could need from a financial calculator, together with a very well laid out menu system. It has been proven: it has been running in the same style since 1989 if my memory does not fail.

The initial model was totally designed by HP, and was programmed in SysRPL. The current model has been made externally under HP contract, but the firmware was prepared by the producer, in order to fulfill HP's specs. This shows in the different approach taken for the solver. Functionally, both machines are the same, with the difference that the newer one includes an additional menu that takes care of currency exchange calculations. (this menu is of interest unless you have a smartphone, which provides updated currency exchange calculations on the fly)

It only misses the advanced mathematical features of the HP19bII to be perfect. By the way, these features are present in the HP30b, but there the user interface is not as slick as this one. And the way you can program the solver has not been equalled in my experience.

The solver will create the corresponding variables, which can be edited at any moment. If you press a number and the menu key of the variable, it gets automatically stored in it; if you press it after another key that is not a number, the solver tries to calculate the value, based on the formula. And there you have a "program" to calculate the break even. you can use it now in boardroom meetings to get a fast idea about how long it will take until your start up starts making profit. 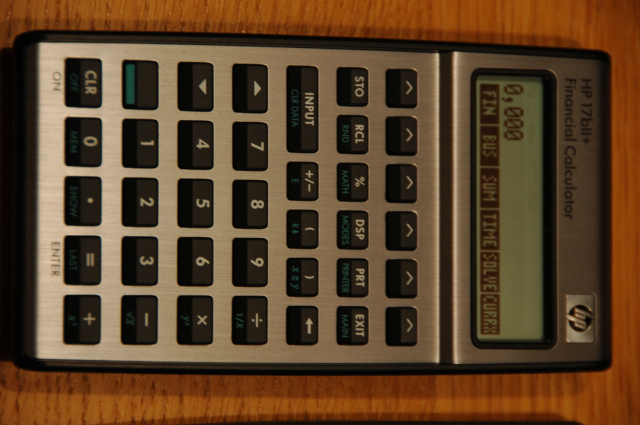 Same happens with the famous Black & Scholes formula. As far as I know, this is exclusive territory of the HP30b; but there are formulae prepared to be entered in the HP17bII, and even on the humble HP12c.

I would say that the main feature of this calculator is the solver, but the rest of the menus are organized in the same way. You can have different lists of money flows or statistical variables, and these lists can be saved, edited and recovered for further work, be it IRR and time value of money calculations, statistical calculations or regression of all kinds.

With the memory it is supplied (28 kbytes), there is no problem in programming additional functions like the trigonometric ones. This programming needs to be done in the solver. It is a pain to enter it the first time, but then you are rewarded with an even more complete calculator. I have never been over 7% use of the memory!

You can get a taste of the hp17bii by downloading the app 17bII+ Financial Calculator by RLM software. However, it is not free: 1 cent short of 7 €, in the Spanish shop.

You will not be able to appreciate one of the best keyboards available for a calculator. By the way, do not let anyone make you think that you smartphone is an alternative for your calculator. I have all free calculator apps, and some of the paying ones, including the ones from HP and the fantastic I41cx+; and while they are good enough to save you from a problem, they are no match for a proper calculator on your desk.

The screen is better than the one from the original HP17bII. The contrast and speed of the screen are incredible.

I will discuss in further blogs the solver and its possibilities. It looks like a full programming language in itself!