The new HP39GII has arrived!!

Well, finally it has arrived!

It is expected to arrive to Europe by the second half of the year, but I have received a sample. I have been told that there are 250 samples in Europe. It came wrapped in plastic, not in the usual blister, and without manuals. I have been offered to sell it. As it does not come with the full package, I have some doubts. If you are interested, please drop me a line.

First of all, it has a cover, like some lower level HP calculators like the Smartcalc 300s. It does not come with a pouch  - plastic or leather.

The calculator is pearl white, and it shines, although it can't be seen with the lighting I used to take the pictures. The screen is the same size as the 50g, or slightly smaller. We will see that in future pictures. The color is nice, but it looks student, not professional. 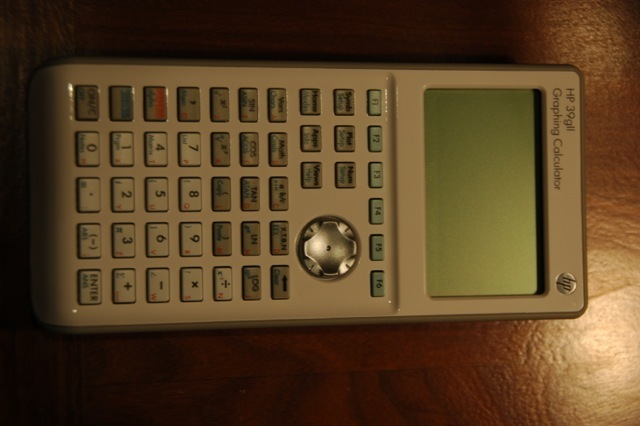 The key feel is much, much better than that of the 50g. I know that this may sond superficial, but I place a high importance in the keyboard feel. Is one of the things that makes you decide and grab one calculator or another.

The box has the same basic shape as the HP 17bII or the HP 35s. The keys are kind of protected by the sides, and the lower side has round corners so that it can be grabbed with one hand comfortably. There is an USB connection on the side, not on the top, of the kind found on the later Blackberries or the Amazon Kindle.

As I am writing, I have not downloaded the manual yet: just taken some pictures and done some fast calculations.

The keyboard is less cramped than that of the HP 50g. It does not have the irregular form found on the 50g: round below, square on the upper side. There are no writings on the calculator surface, only on the keys.

But the main attraction of the calculator is the screen. Let's see a couple of pictures and you will appreciate how sharp thenumbers are.

It is worth noting that the screen supports several grey levels - not just pure black and white.

Due to the poor lighting, the numbers look not as sharp as they really are. See them compared with the mighty HP 50g:

Side by side, both look the same dimension. The rounded upper and lower edges of the HP 50g make it look slightly smaller, and the screen just slightly bigger.

After this initial exploration, I am beginnign to play with it. I need to download the manual and start to play with it. As it is not RPN, I need to learn it from scratch. I have to confess that I have no previois experience with either the 39gs or the 40gs.

The price will be 79,9 €. It is available already, although in the conditions described above.

Laurent
JGD | 01/05/2012 22:41
Re: The new HP39GII has arrived!!
For my taste, it is a much clearer tactile feedback than on the 50g. Keys seem more separated and therefore easy to click. The keyboard looks less encumbered than on the 50g. The height of the keys is lower than on the 48 family and on par with the 50g. Forgot to say that they are click-and-rotate!
The keys are painted, but it does not show so much as on other calculators.
I have been told that the cursor wheel is 8-direction, not 4-directions like on the previous HPs
Solo los usuarios registrados pueden poner comentarios.

The new HP39GII has arrived!! - Calculator blog - The Calculator Store